Welcome to my Blog

This weekend was the first annual Worn Out Fashion Show presented by The Stranger (a popular local Seattle paper).
The show was sold out...and boasted looks from all kinds of designers ranging in tailored Menswear, clear raincoats worn by naked ladies (Woot!), and giant fluffy tulle coats worn by dance group Dance Belt.

Part of the competition was a challenge offered by Vitamin Water Zero. It was an inspiration and color challenge. I was given SQUEEZED Lemonade, the colors being light grey and citron gold. Well, of course I immediately thought; SEQUINS! 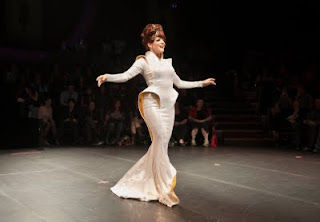 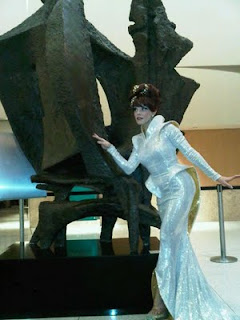 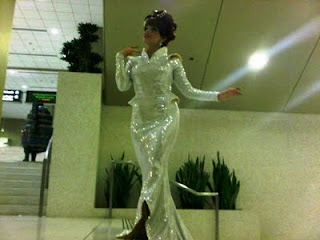 Not only was the dress full sequin, in the color scheme of the bottle design. But my hair was decorated with pieces of the actual bottle, cut into rings and sewn to the wig, then the bottle label was cut into diamond shapes and glued to the accessory. 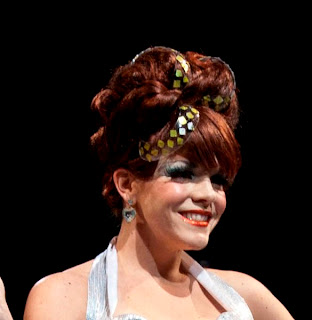 And Finally. Myself and a helper spent 2 days adhering over 2000 crystals in the citron and grey color, to a pair of platforms: 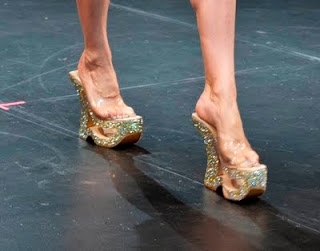 The winner was this adorable sportswear look from Miriam Reynolds:
Congrats!

(photo by Suzi Pratt)
Posted by Administrator at 10:30 AM 1 comment:

...and a slew of other designers. hehe. Well, I'll take acknowledgement where I can get it.

The Stranger is our local Seattle "too hip for this shit" weekly paper. Condescendingly hilarious, they often beat the crap out of mainstream fads, reserving their praise for the underdog. I'm thankful to be a part of their first Annual Fashion Show (Worn Out), but also to have a mention alongside other fabulous hard working designers in this weeks paper.
It's as nice as being featured on Cocoperez, or receiving a lovely email from Katy Perry's tour costume designer, and nice comments from Bob Mackie, and having Betsey Johnson tell me I'm 'Amazing'. *wink*

Finally my city likes me! 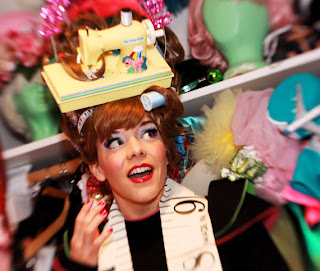 What it looks like: An assortment, ranging from bridal to cocktail to theater, with a focus on burlesque costumes in Von Stratton's aesthetic: high-glam fantasy sci-fi, with vintage throwbacks and a nod to Judy Jetson. This includes, for instance, a backless, body-clinging, reveal-ready gown that represents Venus, all aswirl with purple organza and satin and sculptural gold-tone bust cups suggesting a midcentury sexy-alien look. (For upcoming projects, Von Stratton has collected metallic place mats, mirrored paper, and solar-cell panels because she loves their futuristic sheen.)

Worth noting: The rules of garmentry become twisted in the realm of the stage world: Interior linings, ordinarily kept private, are exposed during the disrobe—so they must be especially dazzling. And the costumes appear delicate, but they can't be: They get thrashed when they're so joyfully whipped off and flung around.

Posted by Administrator at 3:01 PM No comments: 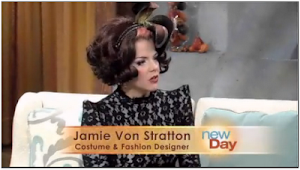 For the diva in all of us who desires to be sparkly!